While working as a DTP operator, I have recently started to draw fowl and phoenix using Adobe Illustrator because I was very much impressed by works of Itoh Jakuchu, a well-known Japanese painter.

As I am not aware of it, but partly because being influenced by Itoh Jakuchu and partly because I love Ukiyo-e, my works are considered to be Japanese-style.

However, the fact is I prefer drawing a lifeless and absolute world which makes people feel horrible when they see it. 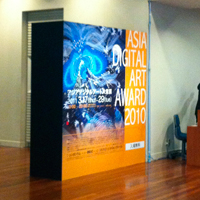